In our post “Which particles can get captured by a filter or by my lungs?”, we mentioned ultrafine particles, which are classified to be 0.1 micron or less in diameter.  They are called UFPs (ultrafine particles) or PM0.1 (Particulate matter 0.1 microns), and are dangerous to our bodies in a different way than PM2.5 (Particulate matter 2.5 microns) , because they can migrate from the lungs or respiratory pathways to the rest of our bodies.  Their movements and concentrations are also different.  Learning about them is a good defense for avoiding them, though, so here’s some of what we know.

UFPs can be emitted by a number of sources. 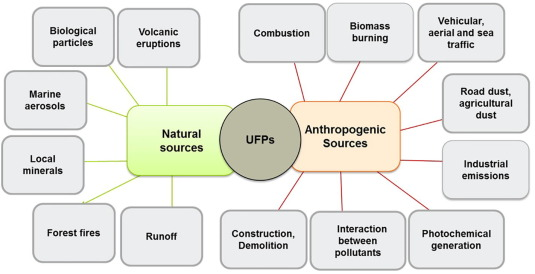 Since Natural Sources are largely not controllable, let’s focus on the anthropogenic sources (originating from human activity).

Aircraft exhaust is the #1 pollutant at major airports, and neighborhoods surrounding the airports even 10 miles away have higher ultrafine pollution levels.  According to a 2014 study, the “level of pollution at LAX (Los Angeles International Airport) was equivalent to the emissions generated by nearly 500 vehicles stalled in freeway traffic every day.”  Another study in 2018 in the Boston area measured particle numbers (PN) indoors and outdoors.  PN overall indoors was compared during times of impact-sector winds (during prevailing NW or SW winds) to calmer conditions; during impact-sector winds, the indoor measurements were about 1.7 times that of calm conditions.  We know that particles infiltrate homes via cracks in the building envelope, open windows, or forced-air ventilation, and this was shown through the study because outdoors and indoor PN levels usually increased and decreased in tandem, except for indoor events like cooking or cleaning.  Unlike road emissions, aviation emissions do not dissipate with higher windspeeds because of the buoyant nature of the aviation emissions.  This is the reason that some ultrafine particles, like wildfire smoke, can be transported in upper-atmosphere winds for thousands of miles.  Interestingly, significantly higher UFP emission per kg fuel burned resulted under landing conditions as compared to takeoff conditions. (2021 study)

HEPA filtration inside the homes helped somewhat; it lowered indoor PN by approximately 33%.  This is good, however, it didn’t have the same effect as lower number of flights or no impact-sector winds.  This causes us at HypoAir to continue recommending sealing homes to the best of our ability, and using controlled fresh-air ventilation for homes (via filters).  Ultrafine particles from airports are not currently regulated by the EPA, so we need to protect against them!

Vehicle exhaust: In many urban areas, vehicle exhaust is a major health concern. The following pictorial representation is found in the study “Chemical Composition of Quasi-ultrafine Particles and their Sources in Elderly Residences of São Paulo Megacity” 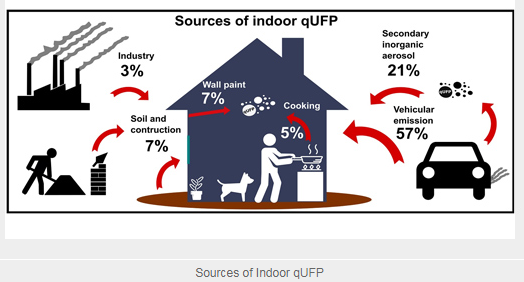 In urban areas with both aircraft and ground vehicle pollution, vehicle exhaust can be identified by larger particle size and higher BC concentration. (2021 study).

Likewise, roadway emissions can be characterized by the fuel type, lubricants used, thermodynamic conditions, ignition technology, and the number of vehicles running.  This is why large cities have performed emission inventories in order to reduce particulates in certain ranges by certain types of vehicles.  National and local governments have devised three categories of strategies to control PM emissions: (1) fuel-based strategies, which include reducing sulfur levels; (2) engine-based strategies, which could alter combustion to reduce emissions; and (3) exhaust emission control strategies, which include the use of modern technologies, such as DOCs, diesel particulate filters (DPFs), and SCR catalysts, focusing on reducing emissions after combustion has taken place but before they leave the tailpipe. (2020 article).  New engines, paradoxically, emit more UFPs than older engines (1996 Health Effects Institute), but with these exhaust emission control strategies, UFPs can be captured before they are released.

Marine traffic: According to noaa.gov, 76% of all trade in the US involves some sort of marine transportation, and marine transportation touches 90% of all trade internationally.  Barges are extremely efficient transporters; what other mode can transport a ton of cargo 647 miles on 1 gallon of fuel?  In comparison, trains move 1 ton at 477 miles per gallon, and trucks at 145 miles per gallon. (2017 article).  However, the sheer number of tons of cargo moved on ships and barges necessitates huge quantities of fuel and emissions.  The International Maritime Organization (IMO) mandated lower sulfur contents in marine fuels beginning in 2020, at max 0.5% sulfur down from 3.5% previously for heavy fuel oil (HFO).  This cap caused many ships to start using intermediate fuel oil (IFO) or other lighter fuels instead of HFO.  The sulfur cap is a step in the right direction for less sulfur in the environment, but it was not expected to reduce UFPs (in terms of Particle Number or PN) from shipping sources.  The total output of PN from marine shipping in 2016 was similar to the total anthropogenic emissions in continental areas.   Thus, marine traffic is a significant source of UFPs (2021 Environmental Science & Technology article).

A third major source of outdoor anthropogenic UFPs is from coal-fired power plants, which produce emissions that are particularly rich in metals. You can access a map of US power plants here (gas, oil and coal), that gives type of fuels, emissions, and demographic information of the surrounding area.   Many plants may filter their emissions to meet standards, however UFPs can form outside of the stack when SVOCs condense (gasses turn into solids and thus bypass the filter). (2020 article) This process is called nucleation.  The most persistent UFP sources in the low atmosphere near the surface are modern technology fossil fuel-burning power stations, refineries, and smelters, according to a 2018 study.

A fourth major source of outdoor UFPs is from wildfire smoke and controlled burns, which can vary significantly depending on the type of wood burned and its moisture content.  Wildfires can also smolder for a long time after being “extinguished”, and this smoke contributes significantly to the total wildfire emissions.

Indoor UFPs are a combination of what has leaked into the house from the outdoors, and what is generated indoors.  Cooking and cleaning are large contributors, as well as candles, incense, smoking and e-cigarettes, and (in unconditioned climates) mosquito coils.  The use of e-cigarettes by children and young adults is unfortunate because their lungs are more susceptible to damage from UFPs.  Also, if you have a laser printer, it is surprisingly one of the major contributors to UFPs in offices (and homes!). 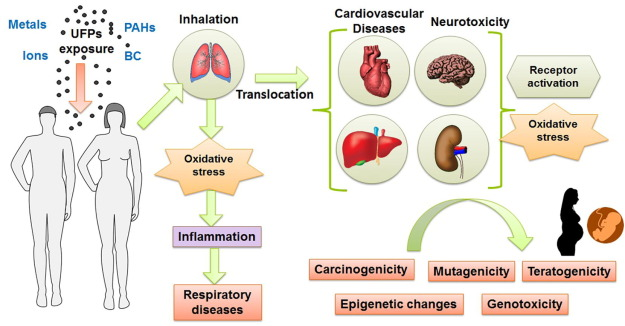 Here is what happens when our bodies encounter UFPs.  They are normally inhaled (effects via mucous membranes, skin and eyes are much smaller). The larger particles (10 microns and larger) can be trapped and removed via the mucous system, but smaller particles (2.5 microns and smaller) may be trapped in the alveoli and terminal bronchioles.   UFPs go into the deepest parts of the lung, and the body’s cellular defense system is activated.  This includes macrophages, various cytokines, chemotoxins and leukocytes, including neutrophils. Some of these are involved in the body’s inflammatory response, which not only damages the invading substance, but is also detrimental to the body in chronic doses.

The UFPs can translocate to other organs such as the brain, liver, kidneys, and because they are fat-soluable, also deposit in adipose tissue. The body’s production of oxidizing species places oxidative stress on the body, which can cause damages to the DNA and mRNA, and lead to cancer.  Even transgenerational changes to DNA can (occur through inheritance!

The toxicity of UFPs depends on a number of factors, including:

With all the sources inside and outside, it seems that UFPs are unavoidable in daily life!  They are everywhere, but here are our top tips for keeping them out of your home and your body:

*Here is the reason we recommend MERV 13 for ventilation filters:  it increases capture of small particles to include that of smog, tobacco smoke, and cooking fumes. 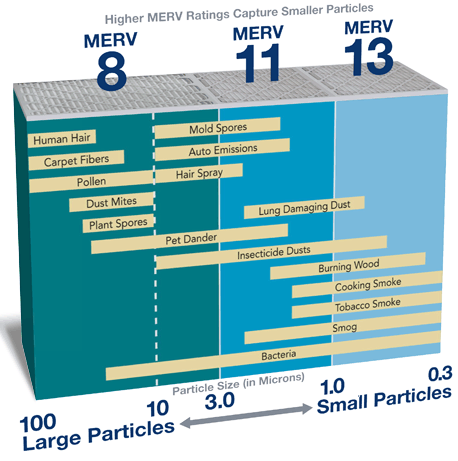 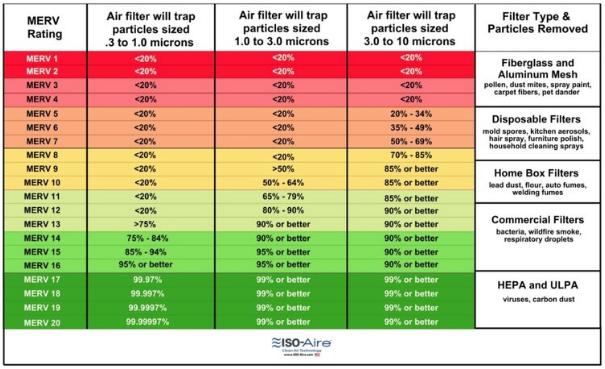 Photo by Kunj Parekh on Unsplash