Why is the Sun in the news so much lately (and what does this mean for me?)

Sometimes with natural disasters and “acts of God” I wonder, was this happening before with the same frequency/intensity while I wasn’t paying attention, or are they really becoming worse?  Hurricanes. Winter storms. Earthquakes. and…Corona Mass Ejections (CMEs).

This “corona” event refers to explosions that  originate in magnetically disturbed regions of the corona, the Sun's upper atmosphere (UCAR Center for Science Education).  In addition, CMEs tend to originate in or near sunspots–those darkened spots on the sun's surface which are have a high magnetic disturbance and much lower temperature than the surrounding gasses. CMEs and solar flares are similar, however CMEs may or may not occur with solar flares.  Here’s the difference between them, as explained by NASA:  “The flare is like the muzzle flash, which can be seen anywhere in the vicinity. The CME is like the cannonball, propelled forward in a single, preferential direction, this mass ejected from the barrel only affecting a targeted area. This is the CME—an immense cloud of magnetized particles hurled into space. Traveling over a million miles per hour, the hot material called plasma takes up to three days to reach Earth.“

We are seeing more news headlines about CMEs because we are nearing the peak of a solar cycle, which happens approximately every 11 years.  The peak this time will be the mid-2020’s.  Already CMEs are causing greater areas of northern lights, when the radiation hits gasses in the earth’s upper atmosphere, as well as satellite damage.  We’re warned that it can cause power outages and communications blackouts on earth, and there are many famous stories of solar storms that wreaked havoc on earth, including the one in 1967 that nearly caused a nuclear war when it jammed anti-missile radars.

CMEs obviously can do a lot of damage to our technologies on earth.  Yet, most of the news headlines say that CMEs pose no threat to humans on the earth’s surface.  Why is that?

Like many other dangers we face everyday (mold, toxic chemicals from the products we use, EMF radiation), this is a case that the majority of people will not feel differently because of a peak in the solar cycle.  Those who have heart-sensitive conditions, however, may notice it. Several studies over the last few decades show that geomagnetic activity (GMA) and geomagnetic storms (GMS) do affect our physiology.  Most interestingly, a meta-study published in 2021  shows the following:

These types of trends can only be seen when analyzing large groups of people and correcting for seasonal, demographic, diet differences, and so forth.  However, it’s not “in our heads” that cosmic rays affect us here on the earth’s surface.  They do, unfortunately for the most sensitive, have an effect.

Amazingly, almost all recorded influenza/possible pandemics have occurred in time frames corresponding to sunspot extremes, or +/- 1 year within such extremes. These periods were identified as important risk factors in both possible and confirmed influenza pandemics (2016 study).  The inference is that maximum and minimum sunspot activity (and thus geomagnetic field activity on earth) actually causes viruses to mutate and cause epidemics or pandemics.  This is a very interesting topic on its own! 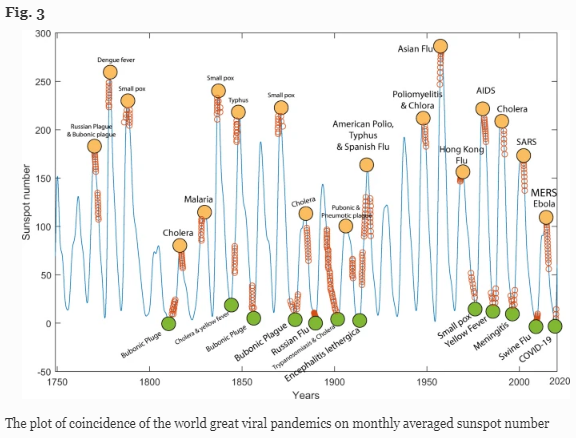 How then do we prevent negative effects of geomagnetic storms on us?  By examining the ways in which these storms can disrupt our lives, we can prepare for them, and subsequently be less stressed emotionally and physically.  Here are some points that lead to how GMS are hypothesized to affect us.

The takeaway from this reasoning is that the most likely method geomagnetic storms cause adverse health is that they disrupt our melatonin levels, leaving our bodies more stressed not only from disruptive sleep, but also from increased oxidative stress.  Contrary to covering your home or head in aluminum foil, there are practical ways to protect your body from the effects of GMS.    Novel methods have been attempted with positive results, such as supplementing melatonin for at-risk cardiovascular patients (2007 study).  Without drugs, we can practice all the good ways of maintaining healthy melatonin levels and adequate sleep, to “beat the odds” (see our post on Maximizing your sleep).   Also, we can increase our bodies’ resistance to mold and viruses naturally (read our post here).

The “other” stress factor of GMS: if you are reading this, chances are high that the internet and electricity play a big role in your life.  Large solar storms can knock power grids, cellular communications and internet services out, so even if you haven’t experienced a prolonged power outage in your life, it’s smart to plan for one by having essentials prepared.  Weather.gov has some good tips about preparedness, but also be sure to visit their link at ready.gov to build your emergency kit.  (Maybe you’ll want to add some melatonin and sleep masks in there!)

Obviously, solar storms and the solar cycle are not within our control, but the way we respond to them can be! Photo by David Herron on Unsplash