In our post “How does indoor air pressure affect ventilation and air quality?” we show a photo of a room being aerosol sealed from the inside out.  This is a great way of closing up the small leaks (up to ½” diameter) that are overlooked by design flaws or construction crews, in order to seal the home’s thermal barrier before finish work on the home is completed.  Here’s how this innovation started: duct sealing.

Before rooms were sealed from the inside out by aerosol sealant, the process was developed for air ducts in 1993.  In one case study by AeroSeal, the innovator and major supplier for this technology, a homeowner had her ductwork expanded to cover previously unserved areas of her home.  After the new ductwork was installed, the system was pressure-tested and it was discovered that air of about 919 CFM (cubic feet per minute) was leaking through the ducts, which is the equivalent volume of about 551 refrigerators per hour(!).  According to energystar.gov, “about 20 to 30 percent of the air that moves through the duct system is lost due to leaks, holes, and poorly connected ducts.”  (To put this in perspective, the average system is 3.5 tons.  A system is required to have 400 cfm per ton of air across the evaporator coil for cooling, thereby 1400 cfm is the normal flow of the average system.  Twenty percent (280 cfm) to thirty percent (420 cfm) would normally leak from the ducts, so this homeowner either had a much larger home, or exceptionally leaky ducts.  In any case, after sealing the ductwork, a 91% reduction in leakage was realized.  Consequently her sinus issues were relieved and she felt more comfort in the home.  The system was previously drawing in dust and contaminants from outside the home and recirculating them in the HVAC system; apparently this problem was relieved by sealing the ducts.

The following diagram shows how air leaks into and out of ductwork (aeroseal.com): 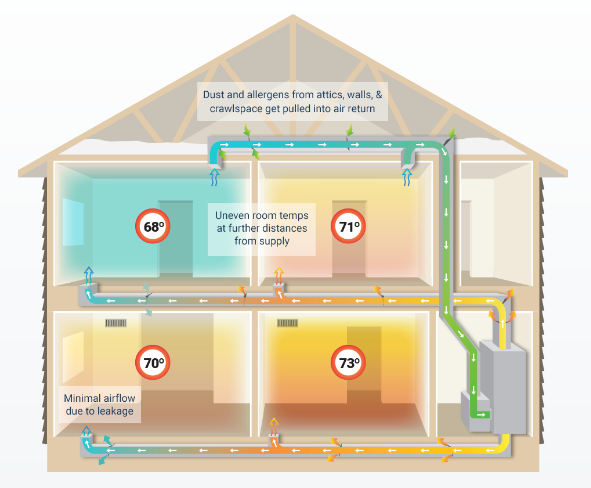 The home is in heating mode shown by the orange ductwork coming out of the furnace in the bottom right.  Ductwork farther from the furnace turns blue (cooler) because pressurized, heated air is leaking from the ducts into the crawlspace and void spaces, before it even gets to to the farthest room.  For air quality purposes, the most important part of the system is the return areas, in the ductwork in the attic of this house.  Because the air pressure inside return ducts is negative (it is being “sucked” or drawn back to the furnace by the fan), any leaks in this area will cause dusty, unconditioned air from the attic or voids into the ductwork (see green arrows entering the ductwork in the top of the picture).  This is one major cause of excessive dust and poor air quality in many homes.  Even more leaky are the ducts in many multi family homes and apartment buildings.  AeroSeal has been successfully used in these buildings since 2007-8.

The sealant used by AeroSeal is a “water-soluble organic compound” (AeroSeal FAQs) with an extremely low concentration of VOCs.  The sealant smells like Elmer’s glue when wet, but dries to be odorless. The safety data sheet reveals it to be a “vinyl acetate copolymer” (35% max weight) and “vinyl acetate monomer” (<0.01% when dried).  In accordance with California Prop 65, the product “does not contain any chemicals known to the State of California to cause cancer, birth, defects, or other reproductive harm.”  According to the EPA, vinyl acetate definitely has exposure limits due to irritation of upper respiratory tract as a result of acute or chronic exposure.  Due to this information, it’s possible that very sensitive individuals could have a reaction with the dried substance in their ducts, so it may be wise to ask for samples before it’s applied in the home of sensitive individuals.

Aeroseal is not the only duct-sealing product on the market.  Here are some other options:

Since dust is a major contributor to indoor air pollution, the dust may indeed be coming from the attics and crawlspace, and/or directly from the outside through building envelope cracks and crevices.  Before contracting for a duct-sealing service, it would be wise to have an energy audit on your home performed in order to discover the most economical ways to seal the largest leaks. Photo by Tekton on Unsplash