The quote by Ben Hogan, “All a golfer needs is more daylight” could be said the same of an artist!  As an oil painter, I am frequently disappointed when sunlight starts to fade and I must put up the brushes for the night, because working with artificial light (at least the ones I’ve found) is not the same :(.

Here at HypoAir, we’re all about bringing the best of the outdoors, indoors.  Clean outdoors is where we feel healthiest, so if you need light, why not find a light that is closest to sunlight?  I was all over this quest, to find bulbs I can put in my painting studio!

If you’ve ever had to choose a lighting system or lightbulbs (as in, choose the color, intensity and energy usage), you’ll know that not all white lights are created the same.  Even four models of “daylight” bulbs are different, as shown in this video (make sure you see or skip to the end).  So, what does daylight look like scientifically?

Daylight when viewed by a spectrometer has a peak in the yellow-green areas of the spectrum, like this: 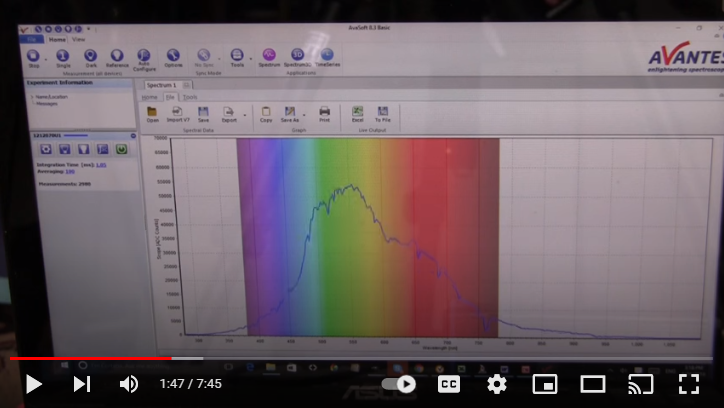 (from video, Which light bulb looks most like sunlight?)

The average consumer in the US goes to a big box store, walks along a wall of lightbulbs and maybe looks at a few sample bulbs that are plugged in to check out the color of the light, then goes home and lives with their choice until the bulbs burn out.  Normally these choices are incandescent (supposedly phased out starting in 2014, you can still find them in most states), compact fluorescent, and LEDs in several varieties.

According to the spectrometer, the closest competitors in my estimation are the incandescent and higher-end LED (not cheap ones, which flicker).  Major differences include: 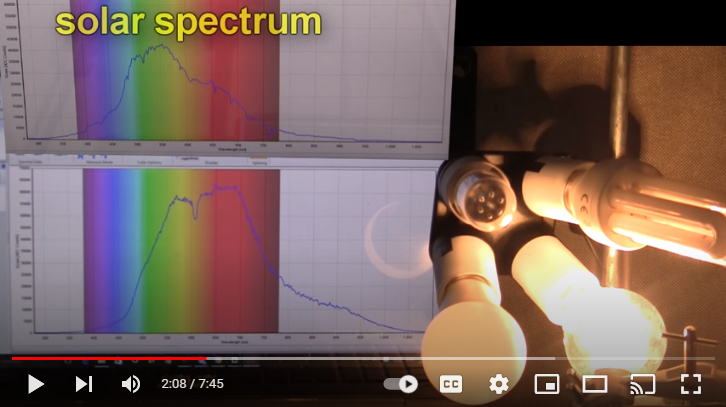 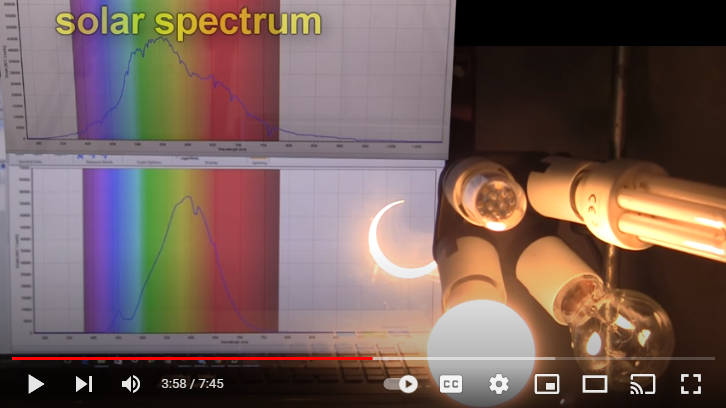 The spectral evidence in the video completely turned me off to compact fluorescents and cheap LED bulbs, because of the erratic range of the fluorescent in spectrometry, and the flicker of the cheap LED when slowed to 1000 frames per second.

So, traditional lighting has a few choices that are reasonably-priced and widely available.  Without employing your own scientific equipment, you can take note of two very important measurements that should be on most packages: CCT and CRI.  I say “should” as my own opinion, because it doesn’t seem to be mandatory, but it is highly helpful!

Corelated Color Temperature (CCT) measures the color of the light itself: lower CCT values like 2700K-3000K (measured in degrees Kelvin) are described as “warmer” with more orange and yellow tones, and are compared to the light of traditional incandescent bulbs.  Higher CCT values are “cooler”, in the range of 4000K-6500K, and are more like natural daylight, with more blue tones.  Color Rendering Index (CRI) is a measurement of the way we perceive color under different lights.  CRI for natural daylight is 100%, which means our perception of colors in daylight is most accurate.

CRI and CCT are very closely related, so that when judging accuracy of color, lighting professionals first define the CCT value being tested, then see whether the color of an object viewed “measures up” to the standards for that CCT.  That said, if you are looking for a daylight experience, you will want values of 4000K and higher (6500K is comparable to sunlight at noon on a midsummer day at the equator), but going higher than 5000K in the home will likely give too much blue light and make your interior seem sterile and cold. (waveformlighting.com)

Lighting companies have given us unique ways to emulate sunlight, including:

Full-Spectrum Bulbs and filters: worth the cost?

“Full-Spectrum” lighting started to become popular in the early 2000’s.  It is not a scientific term, but more of a marketing term.  There is no standard with full-spectrum, only the implied comparison to sunlight.   Full-spectrum bulb companies do make advantageous health claims, but according to the National Lighting Product Information Program, NLPIP, “Full-spectrum light sources will not provide better health than most other electric light sources. Recent research has shown that human daily activities are strongly influenced by the solar light/dark cycle.”   Similar results are also the conclusion of a Cornell University study, and studies assembled by a Canadian Government research department.  In fact, full-spectrum light sources use more energy than fluorescents and cost up to five times more!

Leave it to the Italians to create a high-quality sunlight experience for any room, at any time of day.  The mission of the Italian company CoeLux is “to foster an innovative solution for lighting, architecture and real-estate industries aiming at creating the perception of an extraordinarily wide space, by means of a genuine physical reproduction of optical atmospheric phenomena indoors.” (coelux.com) Its founder was inspired by a book by Belgian astronomer Marcel Minnaert, Light and Color in the Outdoors, at which point he began to experiment with ways to reproduce anomalies of the universe in the lab.  The illusion of Coelux lights is very apparent in rooms without natural light (underground and interior rooms), so that one could believe they were only a wall away from the outdoors (imagine having a “skylight” in your interior office space, or the basement!). Apparently they are working on sunset and other versions, to keep the illusion going.

Want to build your own artificial sun like CoeLux?  Even if you aren’t a scientist, this is within reach with this DIY video.

Changing the light as the day changes via Light Engines

The video images above took one snapshot of sunlight, most likely during mid-day, but did you know that the spectrum changes as the day wears on?  This is not due to the sun putting out different rays of light because it’s approaching sunset in New York.  That would be weird.  It is due to the way our atmosphere filters sunlight at different times of day.

This article shows daylight spectrometry at different times of day, and wow, they are different.  In the evening, the amount of blue light drastically tapers, enabling us to get ready for sleep.  The “night” image/graph is of candlelight, which humans traditionally used before electricity and most importantly, before electronic devices!  Then, it compares these graphs to those from LED, fluorescent and incandescent and shows their deficiencies.  The major deficiency is the inability of artificial light sources to change throughout the day, like sunlight does.

Our bodies can sense time of day and season, due to special ganglion cells in our retina, which measure the amount of blue light hitting our eyes (sunlightinside.com).  Sunlight Inside is one company which created a light engine to mimic the changing view of sunlight, with 2 methods: using different color LEDs that are increased and dimmed, and timing the control of these LEDs to an internal clock based on your location.  The lamps include a number of features that make them quite ingenious:

These “light engines” are not cheap, but are quite useful in getting our bodies back to their proper circadian rhythm using artificial sunlight!

You can get “daylight bulbs” at the home improvement store, and mainly these are 5000K. However the packaging may not reveal the CRI, or color accuracy.  Expect to pay $4 and up for a high-CRI bulb(90+), and $15 and up for an ultra-high CRI bulb(95+): accuracy doesn’t come cheap!

Here are some more creative ways to get “natural” light inside; the links are mostly videos because seeing is believing!

This is definitely an area that we will want to keep our eyes on, as lighting companies continue to research and innovate.  Now it's time to order that ultra-high CRI LED for my art studio! Photo by Layton Diament on Unsplash