If you go into a large building like a mall, warehouse or gymnasium and look up, usually you’ll see the ventilation system of ductwork running through the upper part of the room.  Even in many studio loft apartments, the ventilation system is exposed in the ceiling to give that “industrial” look.  I recently ran across a fabric ventilation distribution system, which are fabric “ducts” that disperse air in large rooms similar to the metal ones.  There are several differences in these fabric ducts, however.

I found this part very interesting, because I never really thought about the difference between these 2 words before.  “Dispersion” means “the action or process of distributing things or people over a wide area”, but “Distribution” means “the action of sharing something out among a number of recipients.”(Oxford Languages)  While the two definitions sound similar due to sharing something, Dispersion talks about area (infinite places) , while Distribution talks about recipients (finite things).  When you’re talking about ventilation and air, Dispersion in my estimation is preferable!  You can see the difference in this picture: 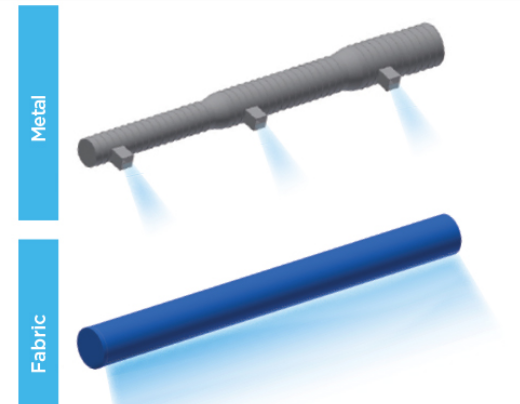 Air is entering from the right and traveling to the left.  On the metal system, you can see three vent terminals blowing out air.  The fresh air is concentrated at these points and after each, there is a lower pressure inside the vent tube, so the ductwork diameter must be decreased in order to keep velocity up, otherwise the last vent (on the left) will not put out air at the proper velocity to cause mixing in the space.  (Tor a great in-depth explanation of this, visit energyvanguard.com). There are several problems with this:  if the ductwork is not sized correctly, the distribution will not be effective.  You know that room in your house that seems to always be significantly hotter or cooler than the thermostat setting?  The problem could be that the ductwork diameter is not sized correctly for your distribution system (the distance between the air handler and from vent to vent).  Modern residences use a lot of flexible ductwork instead of rigid metal ductwork, but the flexible acts the same as the rigid in that it has defined diameters and distribution points.

In contrast, the fabric duct on the bottom has a series of tiny holes in a line.  I think this has a great resemblance to an old-fashioned garden soaker hose.  When a gardener wants to slowly water his whole garden, instead of just one point at the end of his hose, he can run a soaker hose up each row.  The soaker hose has a series of tiny holes that drip water at each point.  Similarly, this fabric duct really creates “dispersion” by releasing air along its entire length instead of just 3 vents.  You know the feeling of sitting under a vent or not sitting close enough to a vent?  You’re either too hot or too cold.  The dispersion system of the fabric duct better avoids cold and hot spots.  Apparently one of the first fabric duct systems were installed in a Danish slaughterhouse to address draft issues that were causing employee discomfort and sickness.  (fabricair.com)

The problem of condensation is a very familiar one in ventilation.  Wherever you have cold surfaces meeting warm, humid air, you’re going to have condensation, and this traditionally happens wherever metal ducts or vents are not insulated properly.  The very nature of fabric (the coefficient of thermal conductivity of fabric is much lower than that of galvanized steel (durkeesox.com)) allows it to be used uninsulated as a duct, because condensation is not an issue.  There are several benefits to the non-conductive quality of fabric:

You’ve heard it before: somewhere in an old ventilation system, there’s a “screw loose” and the vibration of metal on metal is completely distracting!  Fabric in general can be much quieter and even reduce noise coming from the air handler through the installation of a fabric noise attenuator (ductsox.com).

So, for all these benefits, why aren’t fabric ducts becoming popular in homes?  It all comes down to design.  Fabric ducts work when they are placed inside of the space they serve, meaning they are visible.  The fabric duct can be the same color as the ceiling (camouflaged) or a contrasting color, but having ductwork inside the conditioned space necessitates higher ceilings (>8 ft) and an open floor plan works best, where it’s not required to penetrate walls to go into different rooms.  So, for large modern designs, why not consider fabric ductwork?  It’s even possible to print them in any design you can conceive–how about blue skies and clouds, tree branches, an abstract design or fun primary colors?  The ceiling’s the limit! Photo by Jo-Anne McArthur on Unsplash