The fact is that everyone’s home and workplace has mold.  The million dollar question is, is the mold in your space growing and making you sick?  I want to explore this in-depth so that our customers and many others can have peace of mind or look for solutions.

What is mold?  Mold is a type of fungi that grows in multicellular structures called hyphae. Hyphae are long tubular structures resembling garden hoses. They have rigid cell walls that may be reinforced by perforated cross-walls called septa (singular: septum).(How Fungi are Constructed).  Here is a picture of septated hyphae (chegg.com): 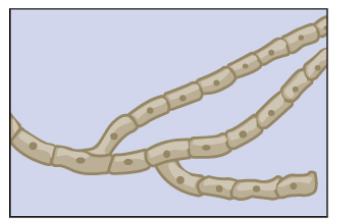 When the mold grows enough to be visible, the colony is called a mycelium.  The mold can continue to grow by adding hyphae to the mycelium, and it can start another colony by sending out small particles called spores.  The spores can be carried by the wind, animal fur, or clothing and our shoes.  When the spores fall into a suitable environment, they will start to grow another colony.

In general, molds need the following to grow:

How we interact with mold:

If we simply kill mold, are we safe?  Unfortunately, no.  “Dead mold is just as bad as live mold. When mold dies, its cell wall dessicates and it gets dry and it will break apart into little fragments. And the fragments have toxins on them. This is a disease of toxins. When you inhale those toxins, they are in you.  If you don’t recognize them as being foreign, you have a difficult time getting them out of your body. (Scott McMahon, M.D., moldymovie.com)

How does mold make us sick?  Illness can come from ingesting or inhaling mold spores, or the mycotoxins they produce.  According to buildingscience.com, mold produces mycotoxins, which are naturally occurring toxins that are thought to decrease the growth of other molds and bacteria (it’s a defense mechanism for the mold). Penicillin is one of these, which as most people know, is a powerful antibiotic.  Mycotoxins can be present on mold spores, presenting danger from inhalation, or on the surface of the mold itself, which is transmitted in infected food like grains, nuts, coffee, or hay (as in the case of animals eating the hay and transferring the mycotoxin through milk).  Here is an excellent presentation on mycotoxins.

According to the World Health Organization (WHO), several hundred mycotoxins have been identified, but several major groups of these toxins cause the most damage to our health.  The danger from these toxins mainly comes from consumption of contaminated food, not inhalation:

Why is it so difficult to link inhaled mold with illness?

We just listed some dangers of ingesting mycotoxins orally, but what about just spending time in a moldy space and inhaling them?  Some incorrect information from the early 2000’s still persists on government websites.  These studies, based on air sampling and animal testing, concluded that there was no proven link between inhaling mycotoxins and illness.  The following points are taken from dhs.wisconsin.gov:

The puzzle was this: what is the cause of the low levels of mycotoxins encountered in the air of even severely mold-infested spaces?  Even the EPA states that mold can be a source of sick building syndrome (SDS–see our post on this!), so what is causing SDS?  The first clue may be in the fact that some individuals living in the same space can become severely sick and debilitated, while others have no symptoms at all.  “We now understand that there is genetic variability among those who have been exposed to mycotoxins. Some people are genetically capable of clearing low levels of these toxins through the liver detox process and never suffer consequences. Others do not have the ability to clear them and get severely ill” (as in the case of a teen patient at Kaplan Clinic). “About 25-28% of the entire population of America have a genetic predisposition to have problems with water-damaged buildings…that’s 75 million people in the United States….Somehwere around 50% of the buildings in the United states have water damage….these (25-28% of genetically predisposed people) can go on to develop multi-system, multi-symptom illness that can be debilitating.”  (Scott McMahon, M.D., moldymovie.com)

Dr. Ritchie Shoemaker’s research article “Newer Molecular Methods Bring New Insights into Human- And BuildingHealth Risk Assessments from Water-Damaged Buildings: Defining Exposure and Reactivity, the Two Sides of Causation of CIRS-WDB Illness “ also presents several other reasons why the links between mold inhalation and mold illness were not previously made:

Exposure to Water-Damaged buildings (WDB) is one cause of CIRS (Chronic Inflammatory Response Syndrome).  Dr. Shoemaker goes on to describe the ability of three new technologies to document the physiologic basis for adverse human health effects as part of CIRS: HERTSMI-2 (a modified ERMI air test for the WDB environment), GENIE (Gene Expression, Inflammation Explained, a gene test for affected individuals), and NeuroQuant (an advanced volumetric brain MRI for affected individuals).  “We can now show specific exposures from WDB that result in specific immunologic reactivity”, including “at least 15 objective biomarkers found in CIRS cases but statistically found far less commonly in age- and gender-matched controls…”   Let’s break that down:  Biomarkers are “A biological molecule found in blood, other body fluids, or tissues that is a sign of a normal or abnormal process, or of a condition or disease.” (cancer.gov)  That means that those who have CIRS due to WDB have distinctive clusters of symptoms not found in other patients, such as abnormal molecular protein levels and volumetric changes in the brain found by NeuroQuant. These changes in brain volume in CIRS due to exposure to WDB were unique and different compared to those of Alzheimer’s, Parkinsons, and even CIRS due to Lyme’s disease.

Putting the Pieces Together

The combined facts that: 1) mold often hides unseen behind walls, ceilings and floors, 2) mold toxins can affect one person in a household but not others due to genetic predisposition, and 3) many doctors have not been trained on the health effects or symptoms of mold toxicity, causes frustration and misunderstanding galore.  “Probably at least 50% of my patients have been told that they were crazy, or that they were making things up or they needed to see a psychiatrist or that there was something wrong with them, but it wasn’t physical.” (Scott McMahon, M.D., moldymovie.com) “Most physicians would simply not believe that asthma, chronic sinusitis, even some cases of bronchitis, and some cases of cancer are intimately linked with mold and their poisonous byproducts.  This is documented in the scientific literature. So there’s this chasm that exists between what we’re hearing and talking to our private physician about, and what he is prescribing for us.” (Doug Kaufmann, host of Know The Cause, moldymovie.com)

Besides CIRS, Mast Cell Activation Syndrome (MCAS) is another illness caused by exposure to WDB.  Mast cells are a type of white blood cell found in many organs of the body that play a large role in our immune system, releasing over 200 chemicals in response to different environmental triggers.  Sometimes they become oversensitive/overactive, and all sorts of health issues arise.  This is MCAS.  According to Beth O’Hara, Functional Naturopath and Functional Genetic Analyst and founder of MastCell360.com, the number one common root cause of MCAS is mold toxicity.

Mold produces toxins that weaken the immune system, so it can lead to overgrowth of other species of fungus, like Candida, and it can also lead to MCAS and cancer, because mycotoxins can penetrate cell walls and attach to DNA, causing destructive mutations.

“Some of the reasons why mycotoxins are a trigger for Mast Cell Activation Syndrome include their tendency to cause:

This happens due to mold triggering something called the Cell Danger Response. This metabolic response in your body happens in order to protect your cells and you from harm.” (mastcell360.com)

Unfortunately, mold can grow in your body!  If you spend some extended time in a mold-infested area, you can breathe in the microscopic mold spores.  The mucus in your respiratory tract can carry the spores to the following areas, where it can colonize (especially species like aspergillus and fusarium):

Treatment centers for mold-related illnesses can at a minimum recommend blood tests and urine tests.  Blood tests can show what mold-related antibodies are present in your blood, and urine tests can show the levels of mold toxins being excreted by your body. (mastcell360.com)  It can be the case, however, that very sick people find that the urine test is negative, because the body cannot excrete the toxins effectively.

After finding out which types of mold are present, the practitioner can prescribe a detox regimen to remove the mold and toxins. The detox will typically be slow, from 3 months to over a year, to avoid MCAS flare-ups and other complications, but there is hope!

According to Mark Hyman, M.D. (moldymovie.com), “If you think you have mold illness, there’s a way out. And it might be a long way out, but there’s a way out. And there is hope, but you have to find a practitioner who could help you deal systematically with the mold illness. One, you have to get rid of it in your environment and two, you have to get it out of your body, and three you have to repair the damage that’s been done.  So those are the three steps to healing from mold illness. If you follow those steps and are focused and you work with an experienced practitioner, you can get better. “

That’s a way forward to remediate your body–but what about your house?  Check out our related post, Taking our Homes Back from Mold. Photo by Dan Meyers on Unsplash